Kalchie was born as Gisela Clara Schiel in 1937 in Koblenz on the Rhine and even as a little girl she was fascinated by expressive art forms such as theatre, painting and dance, for which she sacrificed every spare minute. However, her most ardent dream of appearing on the big stages as a prima ballerina was thwarted by her mother’s worries and concerns. Even after her adolescence, she continued to paint with great creative enthusiasm alongside her family life and showed her works at various exhibitions in the Swiss area. When her husband died much too early and the two children led their own lives, Kalchie devoted herself completely to her art.

In 1993 she graduated from the Rudolf Steiner School of Painting. She is always in dialogue with the universe, with a master, with God. Through this spiritual connection, her studio becomes a magical space where the colors come alive and are not mere material. Rather, they communicate with each other and Kalchie becomes an authorial observer of her own work. The great longing for colors originates long within the artist, she carries the colours within herself before they are put on the canvas. She pauses in front of the pure, white, empty canvas, her tabula rasa, to surrender absolutely to the moment of creative outburst.

Kalchie senses certain colors that she is then determined to express. If the urge is suppressed, she is haunted by a great dreariness that only falls away from her again when the colors begin to flow.

At the beginning of her artistic career, she used a variety of blue tones to express her deep sorrow; she was haunted by a kind of death wish, a longing for union with her husband and the cosmos. As a symbol of her undying love, Kalchie began to make a kissing mouth in her signature to keep the connection with her husband always alive.

This monotony or blockade in the choice of colors was only resolved when Kalchie visited the USA with her daughter and the powerful, inspiring landscapes made such an impression on her that she was prepared to expand her color spectrum.

Kalchie’s painterly dream sequences are created through her spectacular color nuances that captivate the viewer where abstraction takes figurative form. Her profound works reflect her emotional world and the urgency of color causes the viewer to lower their gaze and contemplate; both on the creation of the viewing work, and the creation and processes of our own inner lives.

Her creativity is at its peak in the deep nights when she descends into her own somnambulistic world, merging it with her colors. For Kalchie, the first brushstroke always feels like a primal force that defines the creation process of her works.

Those works have left the Swiss art space with Pashmin Art Consortia and are currently on their way to China to be shown to an international audience at the Art Beijing 2022 art fair and the Archive Art Museum Beijing. 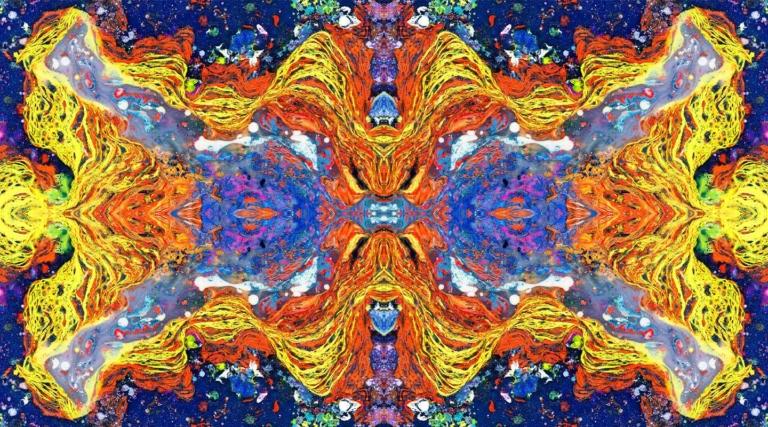